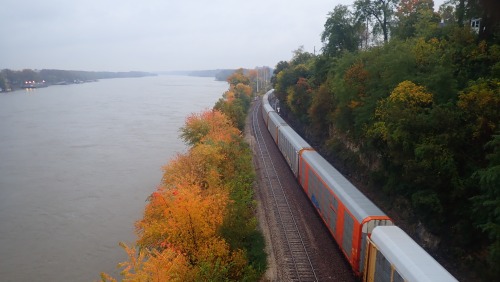 “About 2 oClock P. M we arrived at Saint Charles, where we passed the Evening with a great deal of satisfaction, and chearfulness, and all our men appeared to be in good spirits. We shall waite here for Captain Lewis, who is to meet us from Saint Louis;—  Saint Charles is a Village settled by French Inhabitants.    It is a handsome situation, laying on the North side of the River contains about 80 Houses, built in the french fashion, and has a small Roman Catholic Chapel.”

“Nice canoe. Did you make that?” Yeah. I carved it out last summer with Churchill Clark, a direct descendent of William Clark. “Oh wow, it’s really beautiful. What kind of wood is it?” Douglas fir. “Douglas fir? How much does that thing weigh?” At least 500 lbs. I haven’t weighed it yet. “It’s really beautiful. Where are y’all paddling to?” St. Louis. We started from Three Forks, Montana.  “Yeah? Wait. What? You’re paddling from where?!?” We’re doing the whole Missouri River from Three Forks, Montana to St. Louis. “That’s a long way. How long you been on the river?” We left home June first. “June first! That was a while ago… what, like three months?!?” Five months. “Five months?!? Let’s see, June, July, August, September, October… oh my, oh my, that’s a long time… how can y’all afford to take so much time off work?” 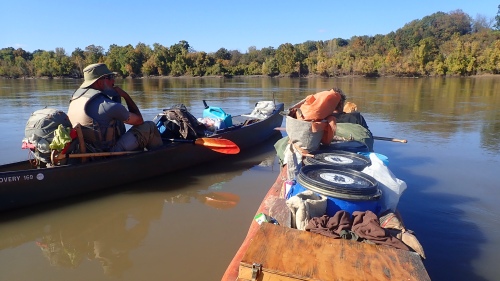 We’ve been asked many times how we managed to take five months off work to drift down the river.

We’ve answered variations of the same questions nearly every day of the expedition, that last question usually preceded by a look of confusion and bewilderment—as if we came from another planet where people don’t have jobs. For us, the answers are all different, yet united by a common theme. Chris works as a carpenter to save up money, then leaves to go on big adventures. He’s taken the last two years off work. Scott worked as a mechanical engineer making medical devices for the past fifteen years. He quit his job to join the expedition, planning a major life transition afterwards.

John, who finished the river ahead of us, does wilderness therapy work with troubled teens. There are few expenses when camping with kids for weeks at a time, so it’s easy to save up thousands of dollars, then quit and live off the savings.

Most of my friends are homeless, hopping from one adventure to another in quests of exploration and enlightenment. Owning a house makes me the anomaly. If I want to dismiss the employment question quickly, I say I’m an author and I’m writing a book about our river trip. People like that answer. It fits cultural expectations that perpetual work is necessary. The actual answer is more complicated, but readily evident in quaint rural towns along the river.

The lower Missouri River is lined with quaint historic towns, here a street in the town of Hermann.

With warm weather growing scarce, we took advantage of a nice day to paddle forty-five miles from Jefferson City to charming riverside town of Hermann. We pitched our tents in the city park and joined river angels Gary and Marcia Leabman for a lovely evening of homemade pizza and local history.

Historic towns along the lower Missouri were built on bluffs, taking the high ground for flood protection. Brick houses are common, intermingled with wood frame structures. When Deb gave us a tour at White Cloud, Kansas, she pointed out modest, but solid houses that were selling for $8,000 to $10,000. In Weston, Missouri, Wendy told us how real estate prices were reasonable, but shot up as the town became a tourist destination. Hermann has also been discovered, driving up real estate prices.

Most people buy an expensive home near a job, but houses are vastly less expensive where jobs are scarce. It’s not difficult to cut expenses long enough to save money and pay cash, typically $20,000 to $50,000 for a modest house in urban and rural communities throughout the United States.

In the lifelong game of Monopoly, people tend to invest beyond their means, starting out with properties like Marvin Gardens, Pennsylvania Avenue, or Boardwalk, which are too expensive to develop. My favorites were always the violet-purple properties of Virginia Avenue, States Avenue, and St. Charles Place, where houses and hotels were affordable, yet brought a decent return on the investment.

Passing by New Haven, we stopped to visit Lance Stroheker and Gary Rice at Astral Glass Studio. Gary moved the business there after being priced out of California. A few years ago Lance and Gary paddled the upper half of the Missouri River. Now they invite fellow thru-paddlers to make glass-blown Christmas ornaments and sign their wall. Lance bought several acres of cheap land nearby, and he is preparing to build his own home.

That’s how I started out in the early 1990s. My then-partner and I worked part-time in wilderness therapy,  then bought land, lived in a tent, and paid cash for building materials. Our combined income was only $10,000 to $12,000, but we gained $50,000 in annual value through property improvements and avoided mortgage interest. Living debt free with few monthly expenses, there was no need for a 9-to-5 job, providing ample time to pursue a writing career, raise a family, and go on great adventures.

Down the street from Astral Glass, Shane Camden is fulfilling his entrepreneurial dream in a warehouse he bought from city for $1 and his pledge to renovate the structure. He launched Paddle Stop New Haven, where he produces beautiful hand-crafted wooden canoes, kayaks, and stand-up-paddle boards.

Scott and his partner Margie have telescoped down from mortgaged houses to renting and will transition to a van after the expedition, giving up life in a cubicle for a life of adventure, supplemented by part-time work to pay minimal bills while incubating their own entrepreneurial ideas. Scott has done it before, landing on Free Parking every time around the board. It’s a great way to save money quickly to invest in adventures or assets. A monthly gym membership provides a convenient place for showers and exercise.

Paddling to Washington, Missouri we found another booming tourist town, where river angels Bruce and Marvis Templar and their friend Ron treated us out to dinner, eager to hear our stories from the trail. And finally we advanced to St. Charles, a short twenty-eight miles from the confluence where the Missouri River joins the Mississippi. Here our triumphant race to the finish line was waylaid by another major storm.

We camped for three nights beneath the Lewis and Clark Boat House and Museum in St. Charles, Missouri.

For the original Corps of Discovery, St. Charles was the last town of substance before heading upriver. They camped for five nights while awaiting Lewis’s arrival from nearby St. Louis. We camped for three nights while the storm dropped heavy rain that gradually tapered off to drifting snowflakes.

The Lewis and Clark Boat House and Museum kindly let us pitch our tents in the sheltered, open-walled lower level of the building, where they keep a replica keelboat and two pirogues. While Lewis and Clark were on the cusp of starting their great adventure, we were equally close to finishing our own.

Thomas J. Elpel lives in Pony, Montana. He is the author of Green Prosperity: Quit Your Job, Live Your Dreams. Go to www.Elpel.info to learn more about Tom’s books and the Missouri River Corps of Rediscovery.