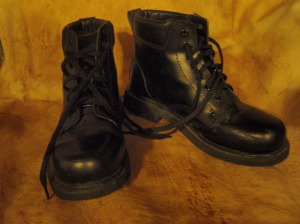 Jeremiah could not wait to dispose of his brand new, taxpayer-funded prison boots.

He was walking along the interstate with his thumb out, still within the city limits of Butte, Montana. A young Native American man, Jeremiah wore new blue jeans and a crisp white shirt. He was the cleanest hitchhiker I’d ever picked up. Oddly, his only baggage consisted of a manila folder with some papers and such.

I threw a few things in the back of the truck to make room and off we went. “Got in a fight with my lady,” he explained. Jeremiah said he’d been living with his girlfriend in Billings for the last 2 ½ years, working on roofing jobs until she kicked him out. “She needed some time,” he said. So, he was headed back home to the rez to his brother’s house. The story was oddly incongruent with his crisp new attire and his distinct lack of baggage. “I left it all behind,” he said.

We talked a lot along the way. We had a lot in common – in a really indirect way. He grew up in Saint Ignatius on the Flathead Reservation. His brother did traditional sweats. I went to the Flathead and participated in a sweatlodge ceremony when I was sixteen. Jeremiah’s grandmother did beadwork; I tan hides. He wanted to know how much I charge for my hides. He’d never tanned a hide, but he’d seen it done a lot.

Aside from some paperwork in his manila folder, he had a few nicely woven horsehair barrettes that he had made, and he gave me a pair when I mentioned my daughters. I told him about my adopted kids’ older brother who was learning to do beadwork while locked up in Montana State Prison in Deerlodge as we whizzed by that town on the highway. I suppose the incongruities should have snapped together at that point, but I never gave it a thought.

I am familiar with the drug and alcohol problems on the reservations and inquired about the challenges he faced growing up, partly out of curiosity to hear an insider’s perspective, partly because I want to get into politics and make a difference, so I am always looking for new ideas, and partly because I wanted to know how he managed to negotiate that minefield himself. I was curious to know how he had successfully held his life together when faced with challenging conditions.

He acknowledged the problem and said he’d seen a lot of friends die in car accidents. He admitted his own fondness for alcohol and said with some pride that for a while he believed he was “God’s gift to women.” Getting away from the rez for had been good for him.

I described my own fears as a parent of young adult and teenage children in a world rife with drugs and alcohol. I commented that as a society we seemed to play Russian roulette with our children. “Here’s a gun with one bullet in it. ‘Hope you survive.” Some kids live. Some don’t. But we as a society consider the losses acceptable enough that we glorify the party life on the big screen and role model it to our children.

I asked if Jeremiah had any insights or ideas to help the situation on the rez. He acknowledged that it was a difficult situation. “You can lead a horse to water, but you can’t make him drink,” he said, using this mismatched metaphor to communicate that people have to make their own choices about drugs and alcohol.

Jeremiah offered to treat me out to lunch in Missoula, and although I hardly need the handout, it felt right to accept his offer. I drove him to a bank to cash a check and then to Fudrucker’s for burgers. Over lunch he confessed to me that he had been afraid to tell me the truth – that he had just been released from prison that morning. Ah. That would explain the crisp new clothes and the manila folder. Apparently he spent three years locked up for selling crystal meth, along with a felony charge for stolen property.

Given that it is illegal to hitchhike out of Deerlodge (where the prison is located) the wardens had dropped Jeremiah off at the bus station in Butte less than an hour before I picked him up on the side of the highway. So much for being the first hitchhiker I’d ever picked up who actually had his life together!

On the other hand, he really did have his life together, at least for that moment. I’m just not sure how long it was going to last, as he treated me to a twisted ice tea and explained how good it was if you drank a little bit off the top, then filled it back up with Black Velvet. He was going home to a tough situation, a place where people harbored hard feelings toward him for selling meth to his younger friends and relatives. He was going home to all of the problems that landed him in prison in the first place. But what else could he do? What else can anyone do?

I’m not sure that a bigger hammer is the answer. If cracking down with tougher laws was the answer, then we would have cured the problem long ago. But as Jeremiah explained to me, you can even buy weed and cocaine in prison. It just costs a lot more than it does on the outside.

Sometimes I think the answer to our toughest problems is not to face them head-on, but to approach them more indirectly, and in this case, to question why our culture is so empty and devoid of meaning that we glorify getting high and getting wasted as worthy achievements.

When I take junior high classes out into the woods to teach them wilderness skills, I see these kids sparkle as if they had been waiting for it their entire lives. They learn how to start fires without matches; they learn how to cook a stir-fry meal over the campfire without any pans; they learn to make their own dishes and utensils; they learn how to sleep warm without a blanket, sleeping bag, or a tent. But most of all, they learn how to have fun – running through the woods playing stalking games, throwing sticks and rocks at targets, having mud fights, swimming in the river, and engaging in marshmallow blowgun wars, as documented in our video Classroom in the Woods.

We never once bring up the topic of drug or alcohol avoidance or prevention, but that’s absolutely what the junior high camping trip is all about. These are kids who live in rural Montana with boundless opportunities, yet live out their daily lives bored to tears with books and paperwork in school. At home they are saturated with media about fast cars, big cities, and living it up with the party life. These kids are desperately hungry for something – for anything – and they will turn to drugs and alcohol if that’s all there is in life. But when they spend a few days in the woods they experience something real, and it is so simple, and yet so profound, that they talk about it all year long.

Jeremiah had another set of barrettes, which I bought for a friend. I drove him to a department store so he could buy a baseball cap and some tennis shoes. He could not wait to be free from the prison boots he wore. He pitched the boots in the back of my truck, and I drove him another four miles up the highway to the intersection with Highway 93, heading north to the reservation. I wished Jeremiah the best of luck, and I meant it with my heart and soul.

Filed under Drugs and Alcohol

One response to “The Hitchhiker”